Mental Health: Don’t Tell Me to ‘Cheer Up Grumpy Guts’ 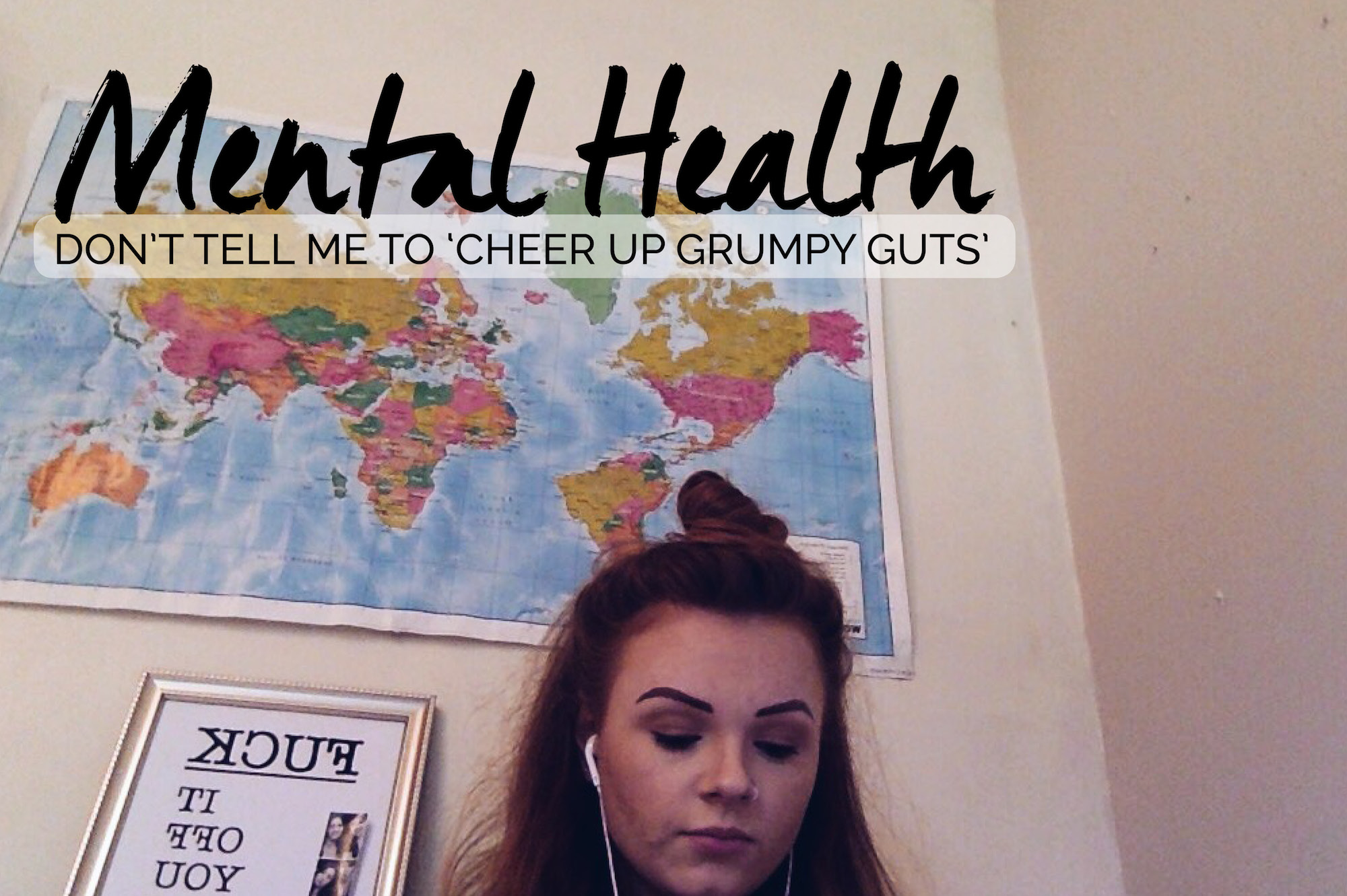 Last week, we saw individuals across the globe come together to recognise World Mental Health Day. The idea of this day on 10th October each year, is to remind us that everyone has mental health and we need to look after it just as much as our physical health. It’s also to let those suffering know that they are not alone, and that they shouldn’t be afraid to seek help. There has, for a long time been a stigma against mental health issues, but with more people than ever now suffering, something needs to be done.

According to the Mental Health Foundation, mixed anxiety and depression is the most common form of mental health issue. Alongside this, women are twice as likely to be diagnosed with anxiety as men. Having suffered with waves of stress, anxiety and depressive tendencies, I know all too well what it’s like to have shitty mental health. I know what it’s like for everyone to think you’re being a dick, or a moody bitch. I know how it feels to have work colleagues tell you to ‘cheer up’, that you’ve got ‘a face like a slapped arse’ or that you’re a ‘grumpy guts’ when you’re going through a stressful time. I’ve had boyfriends unable to understand my indecisiveness and ask ‘why are you crying all the time?’ and it wasn’t until I looked back on certain events I realised they were moments of low mental health.

Because I, for the most part, am a cheerful, outgoing person, I find that sometimes people do not understand or expect me to experience low moods. When I am having a bad wave — an extremely low mood I can’t get out of, anger and frustration or the feeling of anxiety building up to tears spilling out my eyes —  I find that people assume I’m being rude, dramatic or that it’s something I need to snap out of.

Recent findings from the Mental Health at Work Report 2016 published by charity Business in the Community, brought to light that 62% of employees attributed their symptoms of poor mental health to work, or said that work was a contributing factor — this does not surprise me. It doesn’t surprise me because my recent ‘waves’ have been partly due to stress and pressure in the workplace. The study also found that 63% of line managers feel they are obliged to put corporate interests before the wellbeing of colleagues. A lot of people work in stressful environments, and work long hours with barely any time to themselves; these are both recipes for mental health issues, which is why mental health in the workplace needs to be taken seriously.

Although I’ve read various articles on the subject, I’d still feel like a fraud taking time off sick for mental health, and I’m sure I’m not alone in that. People always assume there’s something physically wrong with you when you say you ‘feel like crap and won’t make it in today’. What happens when you go back to the office and people ask if you’re feeling better, assuming it’s a 24 hour sickness bug that’s just going to go away? The stigma is still there. People who aren’t experiencing the same symptoms often either think you’re work shy, or they’ll try to sympathise, by telling you to ‘cheer up, life’s not that bad’. When in reality, highlighting what a shit person you’ve become of late is the worst thing they can do, because it’s not going to make you feel any better, and it’s not going to make you ‘cheer up’.

It’s the unknown – the not recognising that someone is feeling under pressure, the not understanding that everyone deals with stress differently, and the not knowing how to support someone who’s having a hard time in their head.

People with mental health issues undoubtedly need someone to talk to, but find it hard entrusting the right person because of fear they won’t understand exactly how they’re feeling. That feeling of not having anyone to talk to and the sense of loneliness only exaggerates the symptoms.

Even though humans are sociable creatures, and we are more connected than ever, it’s not hard to feel lonely nowadays. As discussed by George Monbiot, social media is one of the main reasons for the rise in mental health disorders: ‘Social media brings us together and drives us apart, allowing us precisely to quantify our social standing, and to see that other people have more friends and followers than we do.’

We all have this innate desire to be liked, and we now live in a world where people can virtually ‘like’ our photos and ‘follow’ us, but when we compare the amount of friends we have on social media to the amount of friends we spend time with on a regular basis, it doesn’t correlate. We constantly compare ourselves to those who share their amazing lives online, those who seem to be reaching milestones we haven’t even dreamt of yet. It’s no surprise we’re feeling lonely — I, too, am victim to this feeling.

Luckily, for those suffering with mental health issues, although there is still a vagueness surrounding the topic, it’s been highlighted that more needs to be done to address such issues. Thanks to the Mental Health Foundation and courses like Mental Health First Aid England, the message of how to identify, understand and help a person who may be developing a mental health issue is being spread across the globe.

Whether your feelings come in waves or they are deep rooted, unable to be shaken off, know that there is help for you, that awareness is being raised, and most of all, that you are not alone.